Miracles of Love in Uganda

It has been a very full week here in Uganda!  I’ve been working with our partners, Medical Teams International, to evaluate the impact HHI is having on child health in the area. I’ve heard some astounding new stories of love awakening, health flourishing and lives being saved – literally!  Here are just a few highlights.

Around the world, and particularly in Uganda, corporeal punishment is still common and is seen as the way to instill morals and discipline in the children.  Its not all that long ago in my country, the US, where the saying was, “spare the rod, spoil the child”.  But once parents participate in HHI training here in Uganda, one of the number one outcomes I hear is that they “no longer beat the children.”  This is quite the radical change, and I think such change can only be caused by love awakening.  After the parents learn about how children are communicating with them non-verbally, all the time, they begin to see things in a whole new light, from the baby’s perspective. Babies do not cry because they are “bad babies”, but because they are tired, hungry, don’t feel good, etc.  Both parent and child benefit and life gets a little easier, as parents become more successful in responding to their baby’s communication, and their bond grows. 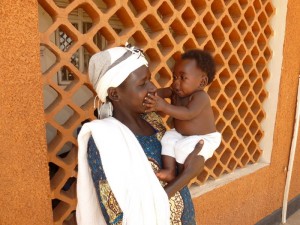 A great story from a father in Lira is that after HHI he began to spend more time with his youngest child and he not only grew to recognize the baby’s needs, but he taught the baby basic signs to communicate even more. Their relationship has blossomed and he is so proud of how bonded his baby is with him. He did not have this relationship with his two older children, who he always turned away and sent to their mother, and who he used to punish with beatings. But, he is not looking back with sadness, rather he is now building new relationships with them as well and he proudly tells of how all of his children now run to greet him and want to spend time with him.   — Way to go Papa!

A few snippets of other success stories from Uganda are these:

And lastly, the story of a life directly saved ~  The story comes from the district of Aromo, where for years thousands of people were confined in refugee camps to escape the savages of war that surrounded their homes.  In the camps, food was scarce, health care even more so, and survival was the daily task.  The majority who survived these camps were left with little dignity, no homes to return to and with HIV.  This is where a young mother was at her wits end with exhaustion and frustration with her baby who had been chronically sick with diarrhea and was not responding to any treatments. She was taking the baby to the river to take drastic action, she was going to throw him in and drown him. At just this time, she came upon Gloria, an HHI Mommy Leader.  Gloria counseled her deeply, listening and offering comfort and hope. After some time, Gloria was able to convince the young mother to take her baby to the Health Center, and she offered to walk her there and stay with her. The outcome is that the baby received treatment and made a full recovery. The veil of the mother’s despair and depression lifted, she returned to her village and now cannot stop talking about how Gloria saved her baby’s life!

Yes, when we say “HHI saves lives”, we are speaking literally.  See Gloria in the red shirt in this picture – Thank you Gloria! 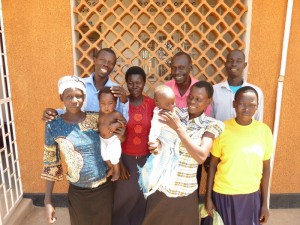 For the last several weeks, I have been traveling around India, visiting hundreds of HHI trainees and trainers. It has been an exciting, heartening adventure to be sure! Every time I do this, I notice a kind of theme that is going on under the current of our work. This time I was delighted to find that the theme is Daddy Power!

In south India, I met with about 100 mothers and grandmothers who had taken HHI’s training in the last year and what I heard loud and clear was how interested their husbands, the fathers, were in learning about their children. While it is common that HHI mommies go on to train other mommies in their lessons of nutrition, hygiene, baby massage and the like, I had not specifically heard before that they were teaching their husbands these lessons. This time, it is practically all I heard! 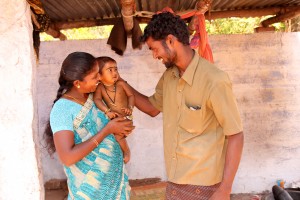 In India, as in many old and very traditional cultures, the father’s main role has been to care for the family financially, rarely taking direct action in the day-to-day care of the children. I think this is a lost opportunity for the men to get the joy their full serving of joy and love out of being a dad. But, after HHI comes through a village, reports are the mommies return home and straight away begin to teach the daddies, and likely they make more space for them to step in and claim some of the responsibilities and the joy that comes with them!

Mothers reported that now their husbands are giving baths, feeding their infants, taking them out the markets, telling them stories or singing them to sleep, giving baby massage and a few women even bragged that their husbands were washing the nappies! One mother beamed with pride as she told me that her husband “takes better care of our baby” than she does!

In speaking with some of the fathers, they have requested to have their own HHI Daddy Trainings. We think this is a grand idea!

Power to the Daddies!

I wrote a post on November 10th with the dream that HHI could touch the lives of another 10,000 children in the last 2 months of the year. Well, we did it!

Our partners in Uganda, Medical Teams International, were able to successfully lead HHI trainings in 145 villages. They trained 4,507 parents – men and women – and they are each caring for an average of 2-3 children below the age of five, meaning that HHI reached another 9,014 to 13,521 children!!! 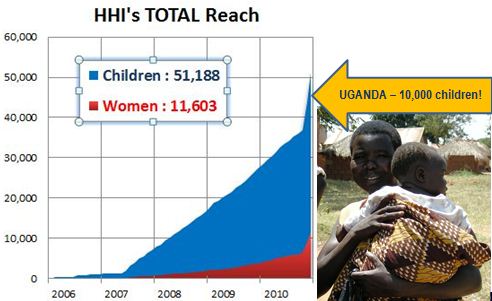 The team reported: “in the first week of the training, parents and children were unkempt, but in the last week; when summarizing with baby massage and baby cues, hygiene and neatness was at its maximum signifying that there was adoption and putting to practice what had been learnt!!!! And the peer educators vowed to continue training those that require the knowledge during their own free time!!!”

These are just the first of the outcomes, and they are of huge significance! The parents stated that they enjoyed learning new information and they liked it even better when it comes via someone who is of their own community, which is how they received HHI’s education.