Hands to Hearts Launches in Haiti

There are now 12 HHI Trainers ready to go forth and share new knowledge, skills and love with their communities in rural Haiti. These women, and men – teachers, health workers, and orphanage caregivers – spent the last 6 days sharing, studying, practicing and creating some new materials especially for the parents and babies of their communities.

HHI Trainers created this song (in Creole) to reinforce the lessons they learned.  It translates to:

“I am talking to you so you can learn how to talk.
I am showing you different things, so you can learn to think.
I am letting you move, so you can move by yourself.
I am treating you kindness, affection and with care.
Further away, you will see me the same and then you will learn to believe in yourself.
Trust me my baby, I am helping you to become strong in your body, in your brain and in your love. To become strong in your body, your brain and in your love.”

The trainers, and our colleagues from Alliance for Children Foundation and the Matenwa School, all made for a week which was not only incredibly productive and successful – but fun! See all the pics here: 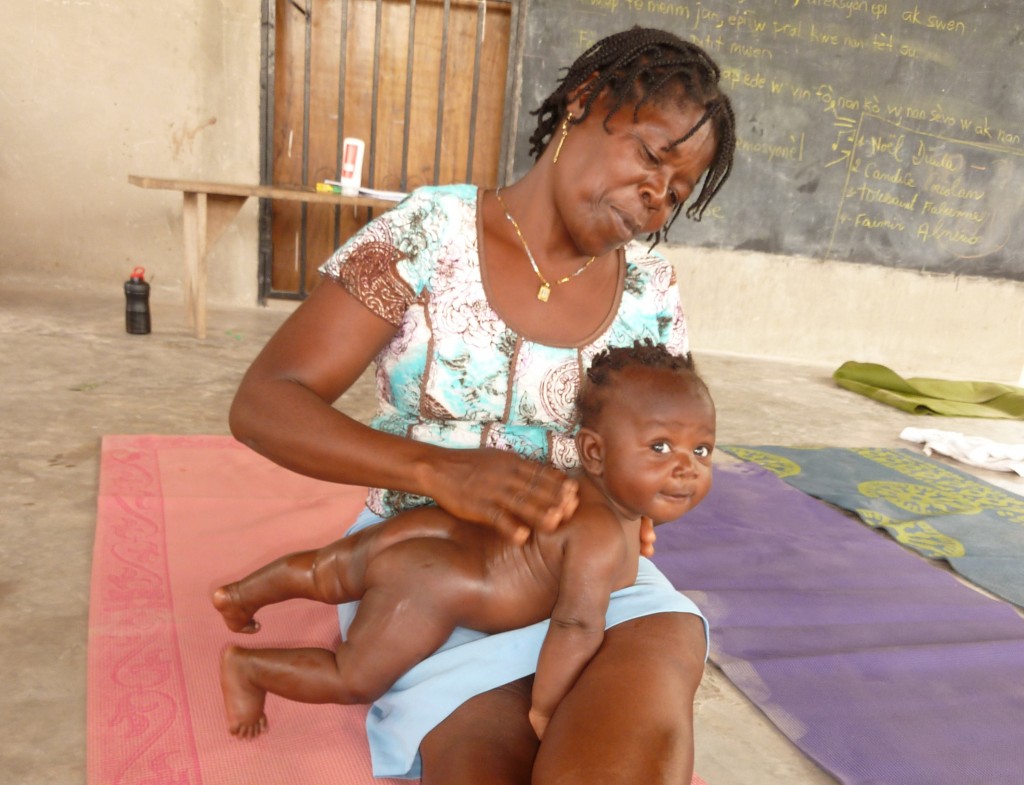 Now these trainers are ready to get to work in their communities of Kennescoff and La Gonave. Conservative estimates are that they will train approximately 1,100 – 1,500 moms, dads, orphanage staff and other caregivers – every year! Thus ensuring that thousands of babies experience: greater affection and nurturing; more talking, reading, and singing; more opportunities to learn and explore.

We are deeply thankful to the Alliance for Children Foundation for making this all possible!

For a long time, those of us working the field of early childhood development (ECD) have been talking about its importance—particularly in the birth to age three range. And for a long time, it’s seemed as though we were the only people talking about it. Finally, though there is enough evidence that others are starting to not only talk, but to take action – fund projects, research, etc. Finally!

The Lancet Journal, one of the world’s most respected medical journals, just released another two papers on early childhood development. What they found resonates so deeply with HHI’s mission and vision it’s incredible.

UNICEF released this video about the debate regarding early childhood development. A few key things stand out:

1)  The return on investment in early childhood development is huge! Outcomes later in life are directly linked to experiences in a child’s first few years so reaching children before they are put on the wrong trajectory is crucial.

2)  We can make a difference by offering comprehensive programs (early learning, nutrition, health) with simple messages rather than data and ideas that most of the world’s caregivers’  don’t have the time, resources or knowledge to apply. Amazing validation for HHI’s work! This is exactly what we do! HHI is hands-on, interactive and assumes no resources or even literacy.

3)  There needs to be a dramatic shift in thinking—No more service silos. There needs to be cross-sectoral integrated services that work together on the issues of poverty reduction, health, early learning and nutrition. Narrow, vertical programs do not work!

4)  The papers also note the importance of the maternal support that this type of service provides, especially related to maternal depression. One of the reported outcomes from mother’s who receive HHI training is that they are more confident in their parenting skills. Confident mommies are healthier mommies!  They also report feeling more connected and supported in their community after their HHI group trainings – another factor that helps to lift marginalization and thus depression. 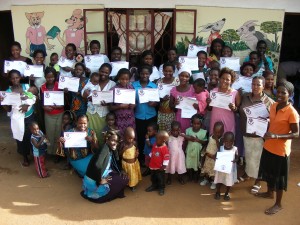 Coaching parents and providing them with support is crucial to supporting the developing child. “This is extremely important not only for a child’s development but also for a child’s survival,” said Dr. Nurper  Ulkuer, chief, early childhood development unit, UNICEF.

“Radical change is the only way we’re going to tackle this problem.” Dr. Richard Horton, chief editor, The Lancet. Governments and international agencies need to bridge services and work together in order to create the necessary change to truly change the world.What can you do? Keep talking about this issue! Continue the conversation on the importance of ECD and how it is the solution to so many problems.

“Every child has the right to develop to her or his fullest potential and to contribute fully to society. Our responsibility to pursue this goal is just as clear.”—Anthony Lake, UNICEF

HHI Awarded by the Dalai Lama

Once every four years, 50 “unsung heroes” are chosen from around the globe to be given a unique and sacred award by His Holiness the Dalai Lama.  On February 23, 2014, His Holiness recognized Hands to Hearts International’s founder and director, Laura Peterson, as an Unsung Hero of Compassion.

“These individuals have been selected as representatives of the tens of thousands of people worldwide who quietly serve the disenfranchised and work to improve our communities through their personal efforts,” says Dick Grace, founder of Grace Family Vineyards and board chair of Wisdom in Action, the organization hosting the unique celebration. “We don’t see them or hear about them in the daily news, but they exemplify a humanism and heroism to which we must each aspire.” 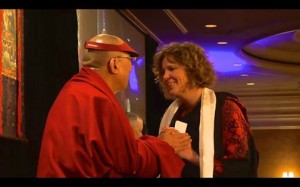 Watch the entire ceremony, Laura is awarded at 1:19.50

Laura was among this elite group of honorees for her creation and efforts in running HHI as a nonprofit dedicated to training and empowering the caregivers to better the health and overall development of the world’s most vulnerable children, in their earliest years.  To date HHI’s training has been led in India, Uganda, Russia, and Nambia, for almost 42,000 parents, caregivers, and health workers, who in turn are able to better care for the 144,300 young children they serve.

Laura was nominated by Ann Down, the founder of The Good Works Institute, Inc., who believed her work through HHI was an outstanding example of the Unsung Heroes’ values and mission. “HHI’s training is significant in several ways,” said Down. “It’s benefiting thousands of children, many of them orphans who suffer a complete lack of emotional care. By teaching essential bonding and affection in the earliest years, it’s preventive, which is much more cost-effective than trying to deal with the negative health and mental health traumas later in life. And HHI’s model is unique, in that women who are trained can in turn train others, which quickly empowers entire communities.”

Laura was thrilled and surprised to be named among 2014’s class of Unsung Heroes. “These people are among the most remarkable, selfless, and giving individuals in the world. The things they are doing are globally game-changing. To be included among such a select few is an honor that’s both gratifying and humbling,” she said. (Read about why Laura was awarded)

Wisdom in Action (WIA) is a nonprofit organization dedicated to increasing awareness of the importance of compassion in action. WIA hosted Unsung Heroes of Compassion 2014, the fourth event of its kind since 2001, to raise awareness that it is each individual’s obligation to help the disenfranchised among us and to acknowledge that each act of compassion makes an important difference to the world.

Our deepest appreciation to Dick & Anne Grace, Ann Down, Christine Wright, Valerie Tate, Elizabeth Share and the many others who made this incredible honor possible.

If you don’t know Laura’s back story about what led her to launch HHI almost 10 years ago, check out this short video and hear her explain why. 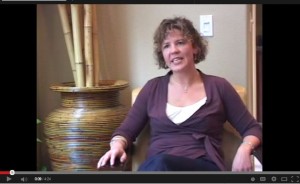 Laura’s premise and HHI’s focus is to awaken love, kindle compassion and save lives – literally!  And, we have seen this come to life – bettering the lives, and yes, even saving them, in some of the most desperate areas of the world.

While Laura is the one who received this award, HHI has become this force for love, nurturing, empowerment and health globally because of an incredible team, the most generous donors ever and committed local partners.  Thank you for being a part of this incredible adventure!

A Community Volunteer in Uganda

Bonny Ajala, pictured in the red  t-shirt, was an HHI trained Peer Educator, for his village of Odoro in northern Uganda. He was enthusiastic about HHI’s lessons on early childhood development and he demonstrated skill and commitment in sharing HHI messages with the parents and caregivers in his village.  He became a popular community leader, spreading HHI’s unique knowledge and skills, supporting parents and young children alike. 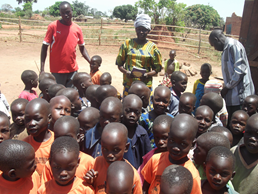 Bonny’s HHI lessons were embraced and led to new, positive practices such as encouraging parents to talk to their baby while feeding and giving baby massage. Parents quickly noticed the positive results these practices had on their children and their appreciation for both Bonny and HHI grew.  The community benefited so much that they recommended him to the local nursery school director, asking him to engage Bonny as a mentor of the school teachers who would handle their kindergartners.  The director took up the initiative and employed Bonny to teach HHI lessons, such as ’’ taking care of myself’’, ‘’language development’’, and ‘’ health habits’’ among others.

Now the school director and the entire community see Bonny as a community resource. So, in addition to his job as an HHI Peer Educator for the parents of his village, Bonny serves as a mentor during school hours to cater for needs of the teachers and caregivers who developed trust and confidence in him.

Thank you Bonny!  We are so proud of you, your passion, commitment and intelligence.

A Grandma Says “Thank You HHI”

In a tribal village, far down a dirt road in the rural district of Angul, Odisha, India, an HHI training was offered to all the mothers and grandmothers to join us to learn about early childhood development.  The response was fabulous, with more than 22 moms piling in, almost all had young infants, and a few had newborns snuggled close to their chests. 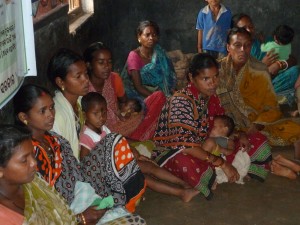 The moms were excited and surprised to have a training that would offer education and support for their role as caregivers/mothers, this was a new experience for them.  HHI is unique in offering parent education and even more so because of where and how we do this, that is in extremely remote areas with few resources.  And, while this village has been raising babies for generations, none of their babies came with instruction manuals (just like the rest of the world’s babies!) and they just do the best they know how. 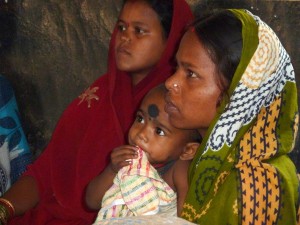 They listened intently, soaking up the new information and merging it into their own knowing and practices.  It is always a joy when I get to witness an HHI training, I learn as much from the participants as they do from our trainers and the conversations that they spark with each other.

A special surprise that I got at this training though was from this grandmother. She was a village elder, born and raised within her tribe, in this small village.  She’s seen a lot in her years and she was a wealth of knowledge.  To my delight she had come to attend HHI’s training and she moved to sit next to me in the back of the room.  I was slightly daunted, thinking, “what could HHI possibly teach her?”.  But, she was very interested in the new information and all of the activities and she leaned over and said to me (via a translator), “Thank you. Thank you for coming to our village. This education is all new to our mothers and they need this, this will make them more intelligent and our children will benefit forever.”

Wow… I was humbled and honored to know the value she saw in HHI.  Thank you grandma!