In recognition of Hands to Hearts International’s success in bettering the lives of infants and their caregivers, UNESCO has invited me, as HHI’s Founder and Executive Director, to join its Early Childhood Care & Education Advisory Committee.

UNESCO understands that Early Childhood Care and Education (ECCE) is an integral part of basic education and represents the foundation and essential step in lifelong learning and in the achievement of Education for All. As part of an effort to strengthen regional capacities and advocate for comprehensive and inclusive ECCE, UNESCO Bangkok develops resources in the form of publications to support evidence-based advocacy and policy advice.

When asked several years ago by a colleague, ” What do you want to do when you grow up?”. My answer was that I wanted to be able to advise and influence the world’s largest agencies in developing programming that will better the lives of millions of children. At the time, I said via UNICEF, but I am more than honored and willing to advise UNESCO.

Posted in: Early Childhood Care and Education | Comments Off

HHI Participates in the First UNESCO Conference on Early Childhood

The last few days I have been participating in the first World Conference on Early Childhood Care & Education, in Moscow. It is a fascinating experience on so many levels. I am learning from some of the most brilliant researchers, program designers, diplomats, aid groups and donors – all of whom are focused on and deeply committed to making our world a healthier, more supportive, peaceful and just world all of our children. I could tell you all of the research facts, the program details or the policy items that I learned about, but that would not be as rich as sharing with you my experience of the people I have met here. This, a world conference hosted by UNESCO, has brought government delegations from over 100 countries together, and that was what fascinated and at times captivated me. I have never been a party to a major UN event, 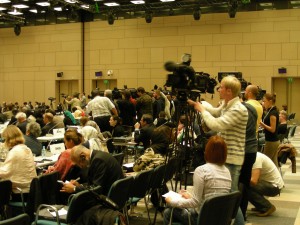 (the media joins in to capture the scene)

where representatives from so many places, all sit behind their country names, all with their own headsets to listen the translation of the flurry of languages, and each with their own speakers to share comments and ask questions from, or at least that is the intention, most of those that stood to share from their microphones did so to make speeches about the great work they are doing.

But my favorite part is that in the midst of all of this political grandeur and diplomatic pomp, the sheer humanness shines through. These country ambassadors, diplomats, ministers of education/finance/health… they are all so human beneath their shiny veneers and titles. I have been both heartened and entertained to watch as the representatives from Slovenia took turns getting up from their table and taking each other’s photos sitting behind their country’s name tag. Then, this led the representative from Uruguay to scoot up the aisle to pass a camera to the Slovenia team and asked that they take his picture.

When I was walking out in the reception room I saw a group of 3 people, 1 of them taking the picture of the other 2. So, naturally I stopped to offer if they would all like to be in the photo and they were very happy as I adjusted them and reset their flash, and then moved them to a different background (yes, though not talented, I am picky in the photography department!). 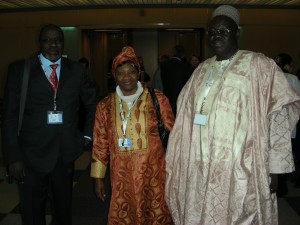 After getting a few nice pictures for them, I passed their camera back and asked them where they were here from. Turns out I had just photographed the country delegation from Cameroon – their Russian Ambassador, their Secretary Generals in both the Ministry of Social Affairs, and Education. They thanked me with an open invitation to Cameroon.

But, I think what has touched me most were those I met this afternoon. I attended a presentation which included Afghanistan’s Ministry of Education and my heart ached and my mind numbed as I read the slide that listed the profound and seemingly intractable problems the children in his country face — war (wars that have gone on and on for generations, and which seem destined to continue), children orphaned or abandoned, using drugs, living on the streets, those facing discrimination due to their gender, ethnicity, religion or language; the list went on and on… At the end of the session I went to introduce myself and I was stunned almost silent by the desperation, the hunger, the wanting and pleading that came screamed through his eyes, his embrace of my hand, his quiet, yet urgent invitation to come to his country, though he didn’t even know who I was yet. I also watched in admiration the curiosity and openness of the Bhutan representative. He stood to ask the group for any introductions or ideas on who could come to his country to teach them how to establish and implement programs to support his land’s youngest children. He was modest, unassuming, gentle and had a humbleness to him that I find to be a rare surface quality at this type of gathering.

All in all, it was an honor to participate, to meet so many amazing and powerful people, and to see their humanity. I was left with a great deal of hope, recognizing that HHI has so many allies all working diligently everyday to create a world we want for the children we love.

As a volunteer for HHI, I have been working on a project to bring some personal stories to the website. I’m talking to donors, HHI trainers, and participants in order to learn about their experiences with the organization and how these experiences have helped them grow as caretakers and as women. Each of these women comes to HHI with a distinct perspective and world view and with a lifetime of culturally specific experiences—a donor from California, a master trainer from southern India, a mother from the slums of Uganda. Yet each of these women is now connected through their shared experience with Hands to Hearts. Certainly HHI has touched each of them in a different way, but it has made a significant impression on each one.

As for me, I’m new to HHI and have yet to see the program in action. But I have been fortunate enough to begin the process of learning more about this influential organization. I know from my own travel experiences in Central America and Africa that programs focused on educating the local community often leave the most lasting effects. Education—unlike tools, water pumps, or money—once given, cannot be taken away. Those who receive it not only get to use what they learn for their own benefit, but also become teachers themselves, passing along their new-found knowledge to their friends and children. In a place where material wealth is scarce and promises of help are frequently left unfulfilled, the gift of education is precious.

As an American, I certainly value my education, but am I really aware of how precious it is? The HHI participants in Uganda were saying that the education they received would change their lives forever—an extremely powerful statement. I may have more total education than the Ugandan women, but I’m not sure that any one part of my education has changed my life as profoundly as it did theirs. Imparting that type of education—the type that changes the way you think and the way you perceive the world around you—is the most valuable resource an organization can provide. I look forward to learning more about the way HHI touches its participants, its trainers, and its donors and to sharing these stories with the HHI community.

Stay tuned and share in the richness of the full version of each of these women’s stories in a feature called “Voices from the Field”.

Posted in: Early Childhood Care and Education, Training | Comments Off

It is time to coin a new acronym. Agencies, governments and aid groups around the world talk a lot about “ECD”, which is an acronym for “early childhood development”. This refers to the age range from birth to eight years old, and is typically a rather broad reference to programs designed to improve young children’s capacity to develop and learn. However, time and time again, we find that ECD in practice is different than in definition, that is that ECD almost always focuses on children who are age three or older. This is the time when children are getting ready for school and often enter into nursery schools and early learning programs. However, since over 70% of a child’s brain is developed by the tender age of three, and the critical time for bonding and attachment has already passed, it is of critical importance that the babies and infants be reached in meaningful ways.

HHI already is designed to fill this niche in both programming for the the youngest children and in coining a new acronym that more accurately identifies our focus of “Very early childhood development”, which we will now refer to as V-ECD.

So, make note, HHI is here to reach the neediest children, at the earliest time possible, with the most simple and cost effective interventions possible, and what we do is in the newly termed category of V-ECD.

This report was published recently, read it for yourself and see how HHI is on target for making the biggest impact for vulnerable children.