HHI is going to TEDxMtHood

On May 2, 2015, I will be giving the talk of my life at TEDxMtHood, in Portland, OR . My talk is, “LOVE, a low tech solution” and it will be about my favorite topic – Hands to Hearts International and our work to awaken love, kindle compassion and save lives. 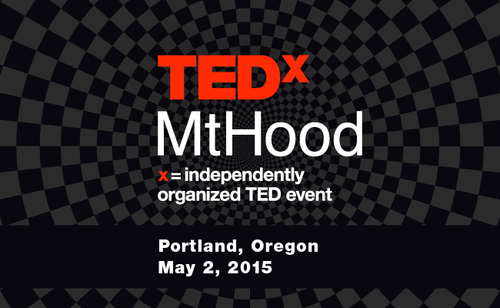 With wild enthusiasm and glee, I invite you to join me for this incredible day! You will not only get to hear me give a talk of my life time, but you get to hear a day chock-full of incredible speakers at the amazing new venue, Revolution Hall. And you don’t just get to listen to them, you get full access to them. During breaks throughout the day, you can ask them questions, disagree with them to their face or just enjoy their company over a yummy lunch.

The $70 ticket includes extraordinary inspiration, new friendships, free swag and a delicious lunch! Learn more and get your tickets today! This event sells out every year, so really - get those tickets now! Hoping to seeing you there. And, if you aren’t able to join in, my talk will be posted online a few weeks after the event. I’ll be sure to share the link!

Recently the Portland Radio Project came to an HHI event and recorded interviews from array of different perspectives on HHI’s work and impact in the world. Check out the five mini episodes and share your thoughts. 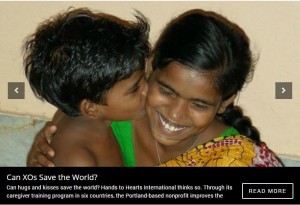 Listen to any or all here

HHI was founded 10 years ago. My vision was to create a program that would, “reach the most little people, at the highest risk [for Attachment Disorder], at the earliest time, with the most simple and replicable form of prevention possible.” HHI grew into this and exceeded everything I knew to be possible. We are celebrating the 200,000 moms/dads and babies that HHI has reached - with knowledge and love. The difference this has made has been as dramatic as saving children’s lives, and as simple (and powerful) as mothers being more loving/nurturing and families breaking the cycle of domestic violence. (click image to see full size) 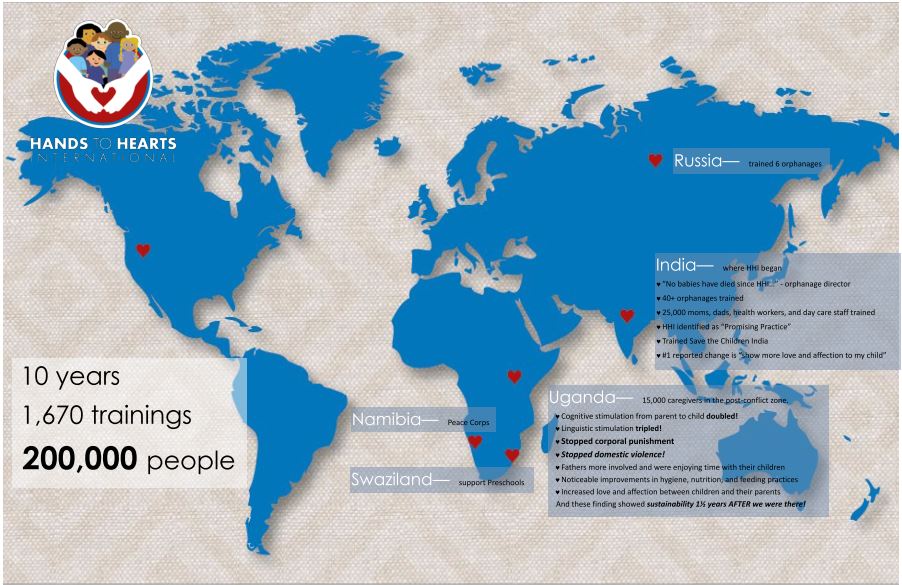 I am deeply grateful to everyone who has given of their time, talents and treasures to grow HHI into the beautiful success it has become. In particular, there are 100 people that over the years have made incredible contributions, a wide variety of ways, and they have made HHI possible.     ​(click image to see full size) 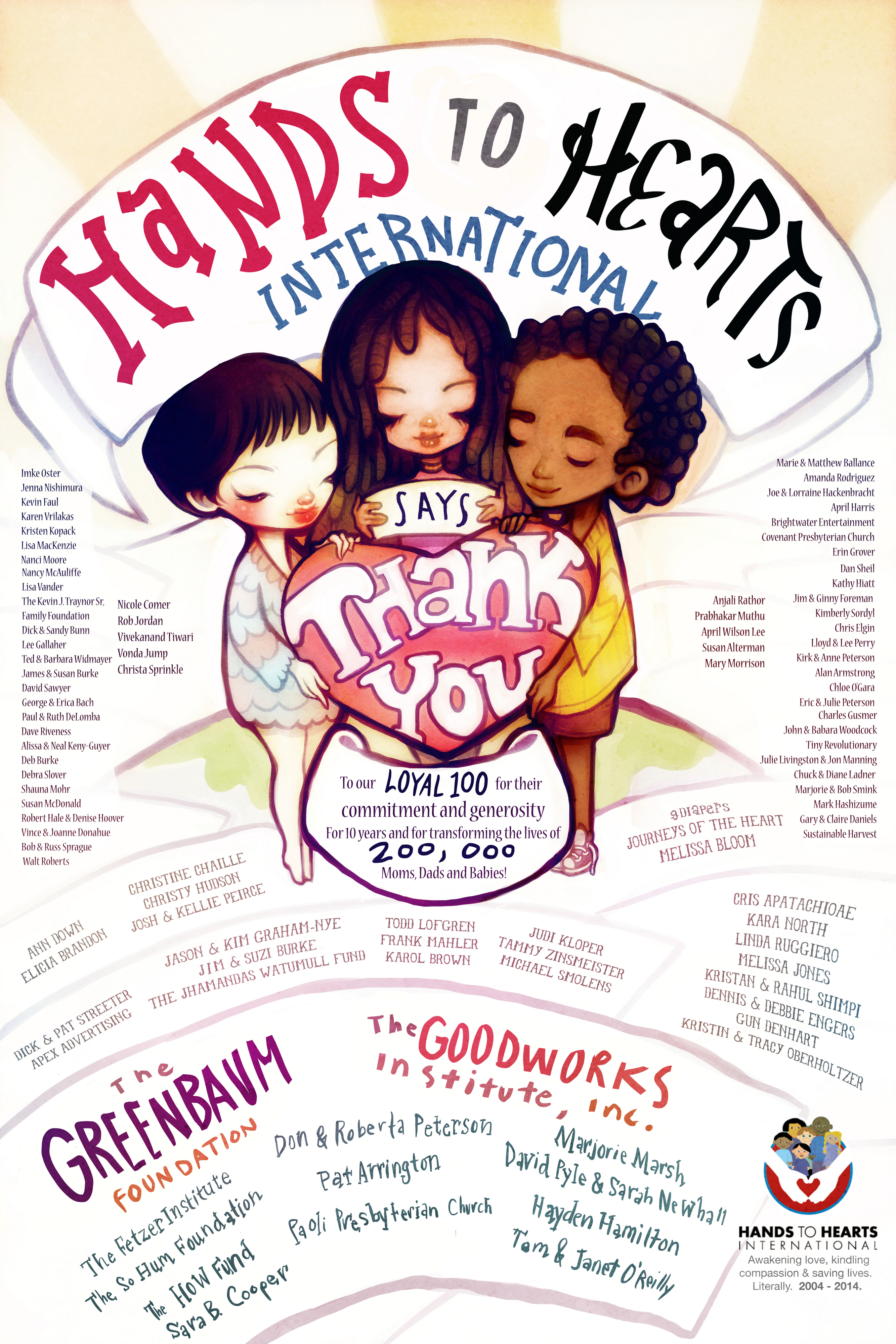 John Anner, CEO of Thrive Networks, along with two of his colleagues, called to talk about the potential of HHI merging with their organization. John had heard about HHI’s situation via One Heart World-wide and he saw the win-win-win potential of HHI joining Thrive’s family of programs. He recognized the huge value of HHI’s program as a service that they didn’t have, saw how was a fit with their mission and their projects. And, he saw how in merging, HHI could get a wealth of support from Thrive and their team.

This led to meetings with the Board, John visiting us in Portland, me visiting Thrive in Oakland. We all asked lots of questions, gave real, authentic answers and dug deep. When I told John that I wasn’t interested in “incremental growth for HHI,” but only in a “quantum leap,” we penciled out what a likely first joint project would be. Using Thrive’s existing network of community trainers around India who train women and adolescent girls in micro-finance and family planning, HHI could easily be added in and thereby reach as many women every year as HHI has been able to reach in 10 years. Sold!

On HHI’s 10th anniversary, I am proud and elated to announce, that HHI is now a part of Thrive Networks! This merger offers HHI the potential for a true quantum leap! We are in the midst of all the details and paperwork that this involves, but it is all moving forward with the full and enthusiastic support of HHI’s Board.

This is a big leap! And we still need your help and support to ensure that HHI’s transition into Thrive Networks is successful. Together our organizations have incredible new projects and funding opportunities, but these will take some time to manifest. Your support now will help create the runway we need to reconfigure and re-launch HHI into new, far larger projects, with the potential to reach to times the number of moms/dads and babies! Support HHI now* and your gift will be DOUBLED by the Greenbaum Foundation. (*until 12/31/14, up to $50,000)

I want to say a true, deep and heartfelt thank you to everyone who has given of their time, talents and treasures to grow HHI into the beautiful success it has become. Be proud! You have been a part of a grand and deeply meaningful social experiment, starting and propelling forward education, love, knowledge, and actions that have touched more than 42,000 moms/dads and caregivers, and 150,000+ young children! The outcomes have been beyond anything we could have predicted, from lowered mortality, improved health, early and greater language and cognitive development, and more. And caregivers report outcomes including greater love and bonding between them and their baby, ceasing corporal punishment and even stopping domestic violence in their homes.

It has been a challenge, but more than that, this adventure called HHI has been the best thing I’ve ever done and I am so excited that I get to keep doing it, that HHI will not only live – but Thrive! My hope is that you will continue to support HHI, to continue on as friends and donors.

It was 12:30pm, June 30, 2014. I was the only US-based staff still left. I’d terminated our office lease, sold off all of HHI’s furniture, and I may or may not have been drinking wine for breakfast. It had been an amazing journey championing HHI around the world, but it was time to close it down.

HHI started 10 years ago out of the frustration and sadness of seeing so many children suffer from a lack of love and nurturing in their earliest years.  I founded HHI as a way to fight back, to prevent Attachment Disorder and ignite the power of love. At the time, I had little idea of what I was about to begin.

HHI grew from an idea in one heart, to an experiment at an orphanage in south India, to an international catalyst for positive change that has touched almost 200,000 moms, dads, health workers, orphanage staff and lots-and-lots of babies! It was an incredible adventure.

I had envisioned HHI as a powerful tool that could be applied in almost any existing project working to improve child health. HHI grew organically all around India, but our first big leap was in 2009, when HHI really put our model to the test by jumping continents and cultures and signing on to be “the innovation” in a USAID funded Child Survival Project in the post-conflict zone of northern Uganda.  This project was filled with challenges, but it was embraced with such enthusiasm and vigor that almost 15,000 moms, dads and health workers participated in HHI trainings!

And, the outcomes in Uganda, even 18 months after HHI’s training, were jaw-dropping and sustainable!  Parents tripled how much they talked with their children each day, doubled their cognitive interactions and radically increased their nurturing and responsiveness when feeding (has a huge impact on combatting malnutrition). Then the really impressive results came in – the ones we didn’t plan on and weren’t looking for, but these came up so much that they were of note in the final report. Parents trained in HHI reported that they stopped corporal punishment (which is very much standard practice) and that they also stopped domestic violence!!!

And yet… HHI remained so far from its full potential.

HHI had been thriving, we were recognized by the Clinton Global Initiative, and awarded by His Holiness the Dalai Lama, but it seemed like we hit a wall. HHI was stuck.  It was January of 2014 and our partner contracts had come to an end and no new ones were on our horizon.  Our strategy to expand wasn’t working, yet we’d done everything in our power to grow and had such astounding outcomes.

It was time for a throw down.

While I am not formally religious, and I don’t care to get into religious-spiritual debates, I do believe in something far greater than myself.  And it was time that she/he/it get on the ball.

What happened over the next six months was… almost nothing. At one point a Hollywood celebrity called and had very serious interest in acquiring HHI to her charitable works. That was an exciting potential, but then as quickly and unexpectantly as that began, it disappeared…

All signs pointed to HHI having reached the end of its life.

By June, the Board and I had made plans to wrap up HHI and conduct one last project with any remaining funds by collaborating with one of our favorite colleagues, One Heart World-wide in Nepal. They do incredible work, ensuring women have safe births and that babies have a healthy start, and HHI would be a great complement to their efforts.

By June 30th, I had done my grieving, which involved a lot of Netflix, too much food and wine, and plenty of long whiny talks with my inner circle. By the morning of June 30th, I’d also sold off all of HHI’s furniture, terminated our office lease and I may or may not have been drinking wine for breakfast. I’d made my peace and was envisioning what my new future might hold. And then damn it all, at 1:00pm, with 11 hours left of my threat-clock, the phone rang.

(read what happened next!)